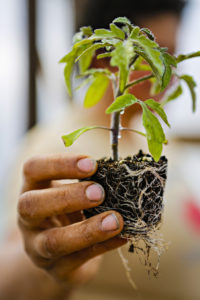 George Washington Carver, one of the most famous African-American icons of all time, was a stalwart believer in conservation, education and equality. Though born into slavery in the small southern town of Diamond, Missouri, Carver went on to inspire a nation with his appetite for learning, his proclivity for experimentation, and his insistence on helping the African-American farmer break free from the social calamities of segregation and poverty. His deep appreciation for the beauty and splendor of the natural world was enriched by his spiritual faith and it sent him on a path toward conservation and education.

What is the George Washington Carver Project?

Based on the five guiding principles of George Washington Carver (conservation, innovation, service, scholarship, and justice), The Mizzou Botanic Garden’s George Washington Carver (GWC) Project is a multi-faceted, interdisciplinary project that will connect the public with the diverse histories of underrepresented people within horticulture, food, and agriculture in an attempt to finally bring their vital contributions to the forefront. In doing so, the project aims to stoke important dialogue about equity and inclusion within our community and food system and reach a broader and more diverse audience.

Components of the GWC Project

Community gardens for use by the MU community for learning about food production and growing fresh, healthy, fruits and vegetables. For more information contact Dan Yuhasz at dfy7dk@mail.missouri.edu.

Henry Kirklin was a prize-winning gardener, accomplished horticulturist, and an unofficial instructor at the University of Missouri. Born into slavery in Boone County, Mo., in 1858, Kirklin started off in the greenhouse business, working for Joseph Douglass’ nursery in Columbia. When Kirklin joined the Mizzou’s horticulture department as a greenhouse supervisor, professors took note of his skill with plants and tapped him to teach the hands-on portions of their lectures. Because of segregation, African-Americans were not allowed in the classrooms and so all of his instruction had to take place outside. Even so, hundreds of students learned about pruning and grafting from Kirklin. By 1900, Kirklin had purchased land and was growing a variety of fruits and vegetables for sale in the community. Over the years, he hosted field trips at his farm for university classes, showing off his innovative creations like a homemade overhead irrigation and rain catchment system. He continued to educate black and white students all over the state about horticultural techniques and he remained a pillar of the Columbia community.

Annie Fisher was an African-American chef and entrepreneur born in 1867 in Boone County, Mo. She made a name for herself as one of the best cooks in town and in the late 1890s, she worked as a cook for the George Bingham Rollins family in Columbia and for the Sigma Alpha Epsilon fraternity at the University of Missouri. She catered weddings, galas and balls for whites and blacks alike, but she received national renown thanks to her famous “old Missouri style” beaten biscuits. Her biscuits were so beloved, Missouri alums all over the country would have her mail them their orders. Her biscuits were even part of the meal served to President Taft in 1911 while he was visiting the Missouri State Fair. Fisher was a keen businesswoman and after purchasing her first home in Columbia in 1901, she went on to own 18 rental properties, 2 mansions, and a 57-acre farm where she raised hogs to make her famous hams. In total, Fisher amassed a fortune of over $100,000. A beloved member of the community, Annie Fisher died in 1938 at the age of 70.

RU_SOC 3085: Seeds of Equity: Exploring Race, Class, and Gender in our Food System

the lens of gender, race, and class.

Carver Lecture Series on Race, Class and Gender in Food and Agriculture

Year-long series on a variety of topics related to diversity and equity in the food system.

Interactive trail weaving through the University campus, showcasing both the abundant diversity of plant species and the diverse cultural histories of plants and the people who grow them.