The byproduct of oil and natural gas, plastic bags, can take anywhere from 10 - 1,000 years to fully break down and decompose. In the meantime, the item can wreak havoc on the environment. As society grows and the spread of single-use plastics continue to expand, some individuals are trying to do their part to… 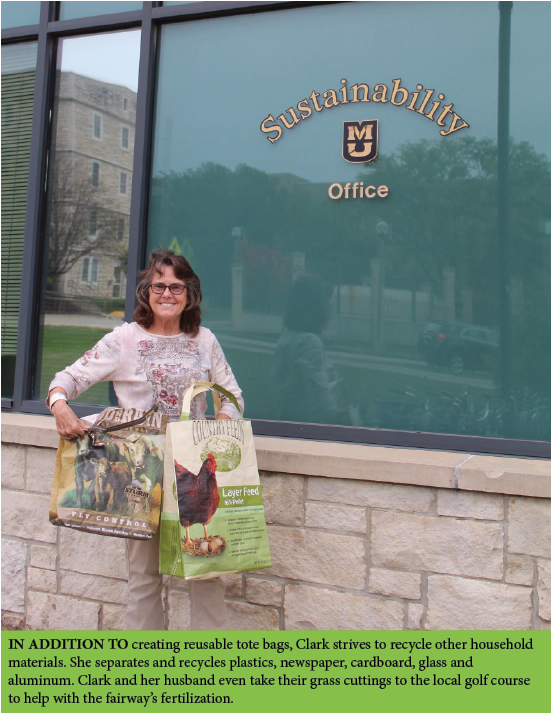 The byproduct of oil and natural gas, plastic bags, can take anywhere from 10 – 1,000 years to fully break down and decompose. In the meantime, the item can wreak havoc on the environment.

As society grows and the spread of single-use plastics continue to expand, some individuals are trying to do their part to divert as much plastic as possible from reaching landfills, oceans, lakes and fields. Elva Clark of Versailles, Missouri, is one individual who strives to do her part.

“I sew feed sack bags made from plastic,” Clark said as she lifted up large, lightweight plastic bags that showcased a variety of animals. She breathes new life into each bag as she converts it into a tote individuals can use when shopping or traveling.

The Missouri crafter said since the plastic is so heavy and durable, it makes sense why the bags wouldn’t easily break down in the landfill. Clark still uses her very first prototype to this day and it’s going strong after three years.

“They are so strong and if you carry something in it that leaves a residue or even like carrying food in from a garden or going to a farmers’ market and carrying the produce (with) a little bit of dirt in it,” Clark said. “Just hold the garden hose in it and rinse it out. Where can you do that with any other bag.”

Clark’s crafting project started out small. However, as farmers, veterinarians and community members heard about her efforts to recycle the sturdy sack, her stack of used bags grew.

She gathered the idea when touring shops in Northern Missouri with her sister. After brainstorming on how she could reuse the plastic feed bags putting her own unique spin on them, Clark began sewing the bottoms of the bags and the handles to create a tote. Now, she creates up to 10 bags a day.

“I have my own sewing machine and thread,” Clark said. “And lots of time.”

Clark will be the newest vendor of MU Sustainability’s Campus Farmers’ Markets this spring. However, if you would like to purchase a long-lasting and heavy duty tote before then, Clark encourages individuals to call her at 573-378-0440. She makes trips to Columbia to see her grandchild and can deliver the tote upon request.

Each bag is sold for $10 a piece, with 10 percent or more of the proceeds going toward a non-profit organization named Global Grace. This charity helps build, furnish and supply orphanages in India with the essentials they need.

“My daughter and husband who live in Detroit, Michigan, have started a foundation,” Clark said. “It’s called Global Grace. They are currently taking care of six orphanages and building one new one.”

As Clark explained, without the orphanages, the children would be “thrust out onto the street” so she does her part in anyway she can. Sometimes she will even donate 50 percent of her proceeds to help ensure this partnership that was started between her son-in-law and his friend who lives in Kakinada, India, can maintain their assistance with the children.

“I want to do my part, and I feel like if everybody did at least something, then it would be a beautiful place for the grandkids,” Clark said.