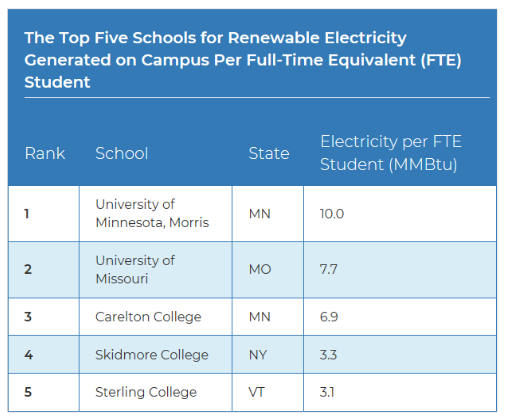 “At Environment America, we advocate for transitions to 100 percent renewable energy on college campuses because they are pivotal institutions in their community,” said Environmental America intern Andrew Schloss in a recent email. “We have seen successes at schools all around the country, including at the University of Missouri.”

MU was ranked second on the list of Top Schools for Renewable Electricity Generated on Campus per Student with 40 percent of energy produced on campus coming from renewable energy sources. The university was the only SEC school to rank within the top five colleges on this list.

Additionally, MU ranked fifth on the list for Top Five Schools for Heating, Cooling, Hot Water and other Non-Electric Energy Produced per Student with the campus’s biomass boiler making up most of MU’s renewable energy. MU’s Combined Cooling, Heat and Power technologies used on campus is nearly twice as efficient than that of conventional “electric only” power plants, reducing fuel use and emissions.

MU is excited to be ranked on both of EA’s national charts, as we are a proud supporter of renewable energy for present and future generations to come. To learn more about MU’s renewable energy sources visit the MU Sustainability website.