As a whole, the University of Missouri uses a considerable amount of energy! Think of all the day to day operations that get undertaken here on the Mizzou campus: all the extensive research equipment, all the lighting and heat necessary to make comfortable learning happen and all the computing power necessary just to keep things afloat! With all these drains on power, it is no wonder that Mizzou’s energy consumption consistently tops one-hundred and fifty million kilowatt hours per year. 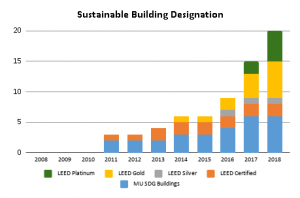 Comparing electricity use against campus population can give Mizzou students, faculty and staff a much more personalized look into how the Mizzou community as a whole consume energy on campus. A careful examination of the data presented below shows a fairly clear trend of energy consumption rising and falling with rises and falls in campus population.

Electricity Consumption Based on Building Space 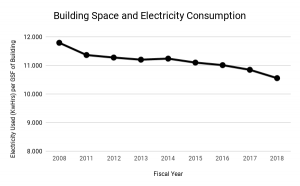