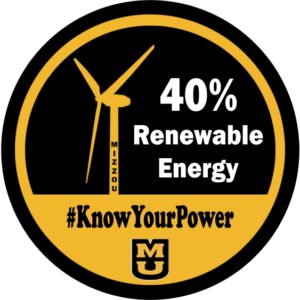 Since 1990, education and general (E&G) space on campus has grown by more than 55 percent. At the same time, Energy Management (EM) has reduced energy usage by 21 percent and greenhouse gas emissions by 62 percent on a square foot basis. Annual cost avoidance totals $10.4 million, with a cumulative cost avoidance of $92.8 million since 1990.

MU uses Combined Cooling, Heat and Power (CCHP) technologies to produce steam, chilled water for cooling and electricity for the campus. The efficiency of this process is nearly twice that of conventional “electric only” power plants, reducing fuel use and emissions.

What is Combined Cooling, Heat and Power?

Watch this video from the International District Energy Association to better understand how MU heats and cools our campus with the help of our Combined Cooling, Heat and Power.

Renewable energy makes up 40 percent of the total campus energy supply. Currently, MU is on the Top 30 On-Site Generation List, behind Walmart, Apple and the U.S. Department of Energy, and ranked sixth nationally in on-site green energy in the EPA’s Green Power Partnership. MU also is ranked No. 11 for green users among higher-education institutions. MU’s renewable energy portfolio includes:

Most of MU’s renewable energy is sourced from regional biomass fuel, which is used to produce steam and electricity. MU’s biomass boiler uses more than 127,000 tons annually of biomass from regionally sourced biomass, mostly using wood residues from Missouri saw mills and wood product companies. The biomass boiler technology supports the use of other possible regional biomass sources such as corn stover, switchgrass and miscanthus. Biomass fuel was 36% of the total fuel Btu’s used by our CHP Plant to deliver sustainable steam and electricity to the MU campus in FY18.

A significant portion of the electricity MU purchases, 74 percent in FY18, is purchased from an off-site wind farm. Additionally, MU locally demonstrates the use of wind energy on its campus with a 20 kw wind turbine generator, which is used as a teaching resource for MU class groups and organizations.

MU has several solar energy systems located on campus. At the campus power plant, a 34kw photovoltaic (PV) solar which makes electricity for campus using an array of 144 poly-crystalline PV panels, and another 2.4 kw system is located at the Research Reactor. There is a solar thermal heating system which uses evacuated tube technology to collect thermal energy from the sun to heat make up water for the plant’s boilers at the power plant. A solar thermal heating system was also recently added at Gateway Hall to supplement domestic hot water heating.